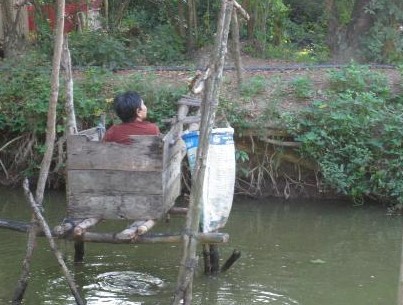 A “free trade” deal whose negotiations were so secret U.S. House and Senate members were excluded appears to be headed for Congressional vote.

Although elected officials, press and the public were barred from monitoring the talks, 600 global corporate and banking industry representatives took part.

If the corporation wins, local taxpayers must pay “lost profits” whose amounts are determined by the trubunals.  Indications are the provision will not allow tobacco companies to sue over no-smoking laws.

The U.S. Congress, earlier this year, approved “fast track” trade deal authority for President Obama.  Fast track allows the President to sign the deal and present it to Congress for a yes or no vote, with limited debate and no amendments.

Full text of the agreement is expected to be released in the coming month.  A Congressional vote is not expected until early next year.

Public watchdog group Public Citizen has been a leading voice against free trade negotiation secrecy.  The group issued the following talking points in response to the announcement agreement had been reached:

The TPP has been negotiated behind closed doors for seven years between the United States and eleven countries, including notorious human rights violators like Vietnam and Malaysia.

While the public, press and Congress have been locked out, 600 official U.S. trade advisors mainly representing corporate interests have had a seat at the table and access to the secret text.

A TPP deal was announced on October 5, 2015. But the TPP can only become reality if the U.S. Congress approves it. Even with the extreme secrecy, we know a lot about the deal because of leaks of TPP texts and admissions made by the negotiators. Just on the basis of what we know already, the TPP could:

 The Trans-Pacific Partnership (TPP) “trade” agreement is terrible news for most Americans:

The first thing to know is that the TPP is not really mainly about trade. By keeping the text secret the White House can make all sorts of claims. But what we know is only 6 of the deal’s 30 chapters even cover traditional trade matters.

Most TPP chapters make it easier for firms to offshore our jobs, impose limits on domestic food and product safety, undermine our health, environmental quality, and financial stability, ban Buy American procurement and other policies – or establish new corporate rights to longer patent monopolies for medicines.

The usual gang of American job offshorers, Banksters, oil, gas and mining giants, and agribusiness monopolists that got us into the North American Free Trade Agreement (NAFTA) see the TPP as their stealthy Trojan horse strategy. They are using the TPP, branded as “trade agreement,” to make it easier to offshore American jobs and impose many policies that could undermine our basic needs and rights.

TPP Would Mean More American Jobs Offshored: From a recently leaked text, we know that the final deal includes the extreme foreign investor privileges that help corporations offshore jobs to low wage countries. These NAFTA-style terms give special benefits to firms that relocate investment and jobs – and this deal includes Vietnam, the low-cost offshoring alternative to even China.

And, the demand from Congress that the deal include enforceable disciplines to stop TPP countries from manipulating their currency – lowering it to gain an unfair trade advantage – was ignored. This despite the TPP including known currency cheaters such as Japan, Vietnam and Malaysia.
TPP Would Mean lower Wages and Greater Income Inequality: TPP would push down Americans’ wages by putting them in direct competition with workers in Vietnam who make less than 65 cents per hour. We don’t need to see a final TPP text to know that!

Since NAFTA and the global WTO, the U.S. has lost more than 5 million (1 out of every 4) of its manufacturing jobs while more than 60,000 manufacturing plants have closed. (You can check trade jobs loss in your state at www.citizen.org/trade-data-center).

The result: real median wages today hover at 1970s levels, even as American worker productivity has doubled, and income inequality has risen to a level not seen since the Robber Baron days.

Ban on “Buy American, Buy Local”: The administration has already confirmed that the TPP would give all firms operating in any signatory country equal access to U.S. procurement contracts, rather than us recycling our tax dollars here to create American jobs.

Chinese government-owned firms in Vietnam would get equal treatment with U.S. firms in getting contracts for goods and services bought by the government paid for with our tax dollars. And, the TPP would limit the sorts of conditions required in such contracts, turning what is now an important policy tool to create jobs and develop new green technologies into a new corporate offshoring opportunity. Requirements like “renewable/recycled” or “sweat free” and obligations for firms to meet prevailing wages could be challenged. Corporations could not be barred because of horrible human rights conditions in their home nations or the firms’ record.

Floods of Unsafe Imported Food: Even before we see the final text, we knew that the TPP would require the United States to import seafood, meat and poultry that does not comply with our safety standards.

And food labels, such as those informing consumers about the country of origin of their food, have been considered “trade barriers” in recent trade suits.

Efforts to stop imports of seafood that do not meet our standards could be challenged as an illegal trade barrier. This is a special threat. TPP countries Vietnam and Malaysia have major farm-raised-shrimp export industries.

Already these shrimp and also farm raised fish from these countries have had high rejection rates even though the Food and Drug Administration only inspect one percent of imported seafood. Antibiotics and other substances are poured into the shrimp ponds before harvest time in Vietnam to counter the effects of one of the “food” sources, which are human feces.

Yet, if TPP goes into effect, the seafood firms operating in TPP countries could directly attack the United States in foreign tribunals and demand taxpayer compensation if our safety standards undermine their expected future profits from the shrimp farms in which they have invested. In effect, the TPP poses a backdoor attack on the gains made in the Food Safety Modernization Act signed into law in 2011 and a threat to core tenets of our food safety system.

Yet they also admit that the final deal would provide foreign firms operating in the United States the right to drag the U.S. government before World Bank and UN tribunals staffed by private corporate lawyers to demand unlimited taxpayer compensation — if they think our laws violate their new TPP foreign investor rights and limit their “expected future profits.”

Nothing has been altered with respect to the TPP empowering foreign firms to skirt domestic laws and courts and sue the U.S. government in an extrajudicial tribunal from which there is no outside appeal and corporate lawyers can demand unlimited sums of taxpayer compensation for foreign firms.

Worse, enactment of the TPP would newly empower about 9,000 foreign-owned firms from Japan and other TPP nations operating here to launch cases against the government over policies that apply equally to domestic and foreign firms.

To date, the United States has faced few ISDS attacks because past ISDS-enforced pacts have been with developing nations whose firms have few investments here. Under U.S. NAFTA-style deals alone, over $430 million already has been paid to foreign investors in ISDS attacks on toxic bans, environmental protections and timber policies.

Of the $38 billion in the 19 pending claims under U.S. ISDS trade deals, nearly all relate to environmental, energy, public health, and land use policies – not trade issues. Under the TPP, foreign firms could even challenge changes to government procurement contracts outside the national administrative and court system – a privilege local firms don’t get.

For Vietnam and other TPP developing countries, this is a life and death matter: a commonly-used cocktail of HIV-AIDS drugs under patent is $10,000 per year, while the generic equivalent costs $250.

These terms could also mean increased costs for programs such as PEPFAR (President’s Emergency Plan for AIDS Relief). And, the U.S. is pushing to establish new restrictions on cost-saving drug formularies.

This attack is aimed at the successful medicine cost-savings programs applied by New Zealand and Australia’s national health care programs. But it could boomerang back to undermine similar programs used to keep down medicine prices for U.S. Medicare, Medicaid and the Veterans Administration programs.

Drugs prices are a major drag on the federal budget. So, if the budget deficit is your top concern and no one in your family relies on these government health care programs, the TPP’s drug price-raising terms still are a major problem for you.

Our aggregate trade deficit with FTA partners has increased by about $144 billion (inflation-adjusted) since FTAs were implemented.

But, the aggregate deficit with all non-FTA nations has decreased by more than $95 billion since 2006 (the median entry date of existing FTAs).

Even using the administration’s net exports-to-jobs ratio and excluding China trade, the FTA trade-deficit surge alone implies the loss of about 780,000 American jobs.

Another NAFTA-style deal – this time with Vietnam, the low-wage offshoring alternative to China – is unacceptable. (Vietnam’s minimum wages are about one-half of those in China.)

Recent Free Trade Deals Repeat Damaging Outcomes: Once again in 2011, we were told that NAFTA-style trade deals would expand exports and create U.S. jobs. Consider the outcome after the full first three years of the 2012 U.S.-Korea free trade agreement (FTA), which served as the template for the TPP.

The U.S. goods trade deficit with Korea has more than doubled.

The outcomes that are the opposite of the Obama administration’s “more exports, more jobs” promise for that pact, which it is now repeating with respect to the TPP.

U.S. goods exports to Korea dropped 6 percent, or $2.7 billion, while goods imports from Korea surged 19 percent, or $11.3 billion (comparing the deal’s third year to the year before implementation).

As a result, the U.S. goods trade deficit with Korea has swelled 104 percent, or more than $14 billion.

The trade deficit increase equates to the loss of more than 93,000 American jobs in the first three years of the Korea FTA, counting both exports and imports, according to the trade-jobs ratio that the Obama administration used to project gains from the deal.

Record-breaking U.S. trade deficits with Korea have become the new normal under the FTA – in 35 of the 36 months since the Korea FTA took effect.

That’s just the surface of it… A lot more is at stake with this TPP corporate power grab dressed up as a trade agreement.

*Benefits for Banksters, more financial crises for us