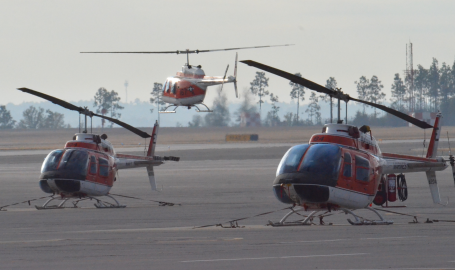 A proposal to exchange Navy outlying landing field (OLF) 8 in Beulah for a site in Santa Rosa poses no significant environmental impact, according to a draft Navy environmental assessment.

The current 640-acre OLF 8 site is located between I-10 and Nine Mile Road, next to Navy Federal Credit Union’s 300 acre complex.  The proposed new site is a 601 acre property in north west Santa Rosa County.  Escambia County bought the Santa Rosa site in December 2013 to “develop the property with improvements that are acceptable to the Navy and suitable for use as a NOLF to replace [OLF 8],” per the draft report.

The Navy wants to relocate OLF 8 because surrounding development is encroaching on it; because at 22 miles out, OLF 8 “is the furthest and least‐used rotary wing 6 NOLF at NAS Whiting Field;” and because the new facility would allow simultaneous “mixed-use” night vision device and unaided training that is currently impossible at other sites.

Escambia officials and developers have expressed interest in developing a commerce park on the current OLF 8 site.

The Navy will take comments on the draft report until February 14.

Article modified to clarify that the proposed Santa Rosa property will be developed with improvements that are acceptable to the Navy and suitable for use as a NOLF to replace OLF 8.

Previous: Your tax dollars not at work: 2017 “Wastebook” details $5B in Federal government squandering
Next: Proposed legislation would ban fracking in Florida