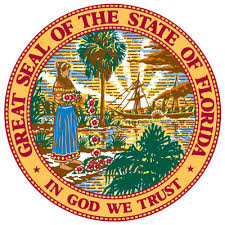 Florida’s Elections Commission says two state political committees that dissolved and gave their remaining money to a Federal PAC did nothing wrong.

“A Florida political committee must use its funds solely for Florida political activities, i.e., depositing contributions and making expenditures, which by definition in Florida law, are for the purpose of influencing only Florida elections,” per Florida Division of Elections Political Committee Handbook information dated August 2015, referencing Florida Statute Chapter 106, provided by the Division of Elections in a November 2015 warning letter to a Gaetz-affiliated state PAC.  (Warning Letter Link)

“A contribution to an out-of-state political entity, to a federal PAC, to a candidate for federal office (even one running for federal office from Florida), [bold added] or to a person seeking selection as the chair of a political party does not fall within the applicable definitions of “election” or “public office,” the Division of Elections Handbook information notes.

But a recent Commission opinion establishes an end run around that law; state PACs can first dissolve themselves, and then give the leftover money to federal PACs.

The Commission, February 23, dismissed two complaints filed by this reporter regarding the disposition of about $380,000 from political action committees created by former Florida House of Representatives and current U.S. House member Matt Gaetz.

On November 2, 2105, Florida’s Division of Elections warned Economic Freedom Foundation about a $10,000 donation to a federal PAC, North Florida Neighbors.  The Division of Elections advised EFF that the donation was illegal; a fact that EFF’s attorney responded to in a November 12 response letter stating that the PAC would “not make this kind of expenditure in the future.”  (D-Audit_Letter Link)  (Response Letter Link)

Gaetz resigned from both state PACs on March 18, 2016.  He announced his run for Congress on March 20, according to Politico Florida. (F-Gaetz_Resignation Link) (N-Resignation_of_Matt Gaetz Link)

On May 18, 2016, the two State PACs filed new Statement of Organization of Political Committee documents, which stated that when they dissolved, remaining funds would transferred to “other section 527 organizations;” but did not specify that those organizations may be federally registered. ( O-Revised Statement_of_Org Link) (G-Revised_Organization Link)

The original, August 2013 Statements of Organization stated that if dissolved, remaining funds would be used to “contribute to candidates, political parties, political committees, or other activities not prohibited by law.” (A-EFF_Organization Link) (K-Statement_of_Org Link)

Both PACs dissolved shortly after filing the new Statements, on May 26, 2016. (H-Disbandment Link) ( P-Termination_Request Link) 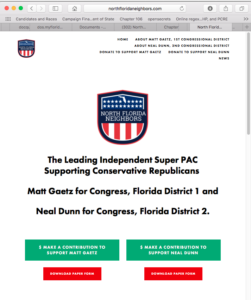 The Elections Commission has now declined to pursue complaints regarding fund transfers from the two state PACs to North Florida Neighbors; effectively codifying loopholes that permit state PACs to transfer money outside of regulatory oversight, in ways that would be illegal while the organizations exist, by simply dissolving first.

“Although Florida political committees are prohibited from making contributions or expenditures to out-of-state or federal political entities, it appears that Chapter 106 does not specifically address the ways in which a political committee may dispose of residual funds after dissolution, nor does it explicitly require a political committee to report the details of such disposition,” Elections Commission Executive Director Amy Keever Toman said in February 23 letters dismissing both complaints.

An attorney for the two PACs referenced in the complaints said “Respondent properly disposed of residual funds in accordance with its Statement of Organization of Political Committee (Box 10),” according to Toman’s letter.

Previous: VIEWPOINT: Why are we chasing butterflies? Establishment Congressional Armed Services leadership has been derelict in its duties for a long time…and it doesn’t look like Gaetz will be any better
Next: “I promised you I’d close it!”