“No part of our legislation has ever or will ever limit public access to any beach currently available to the public,” he said.  “Fee simple title is only being granted for the property which lies beneath someone’s home.”

That seems to conflict with the bill’s text, which specifies that ALL Santa Rosa Island National Monument land deeded to the County can be titled and sold.  According to HR 2370:

Has the Pensacola News Journal read the bill?

Why didn’t they challenge Mr. Gaetz on this key fact?

It looks like Gaetz is being disengenuous.  Something that seems to have escaped PNJ’s keen journalistic eye.  Again.

Perhaps it has something to do with the fact that his bill only protects public access on Escambia’s beach.

Navarre Beach’s future would be up to Santa Rosa Commissioners.  And there’s a whole lot more open Navarre beach zoned public access than Pensacola Beach has. 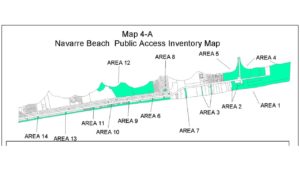 Was this a distraction all along?

Nobody’s talking about all the other public access zones on Navarre beach that would be up for grabs if this bill passes.  PNJ hasn’t touched it.

Potential access zones it appears could be sold off, per Santa Rosa County’s map, include:

*Beach land behind condos.  If condo homeowner associations buy it, they could rope it off to the mean high tide mark.

*Navarre Park:  will we eventually see condos in the Park?

How far can Santa Rosa trust Commissioners with all that lucrative free beach land?