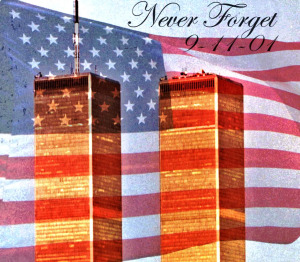 As I know that we all are very busy in everyday lives, but yet, today did you stop to remember what happened this day just 13 years ago.

Wow, yes it really has been 13 years since our soil was attacked by Bin Ladin and his terrorists squad. And where do we stand now.

Since 9-11 we have been involved in numerous terrorist attacks while fighting in war after war that we have not really been aloud to win; and, all the while, we continued losing American lives as well as our sovereignty.

But was it worth it?

To tell you the truth I think the jury is still out.

Just last night President Obama announced that he will perpetuate the fight with going full steam after the new terrorist on the block ISIS.

Great, I applaud him for that.  I think it is great that they want to go after the terrorists.  But how are they going to do it?  Or is this just more political bravado?

I do think that over the last 13 years we have all stood witness to the right ways and the wrong way to combat terrorism.

Just a hint, for future reference, stop publishing talking points and giving heads up press conferences regarding the toppling of the enemies of the state.

Keep it secret, I don’t mind.  And who knows, maybe just shutting the mouth and putting  a halt to all the grandstanding might just save more lives then not.

At the end of the day, we need to not forget what grave situation put us in this position.  We must not forget those who lost their lives and we must hope the intelligence department will finally find a way to eliminate the continuous terrorist threats we are seeing today.