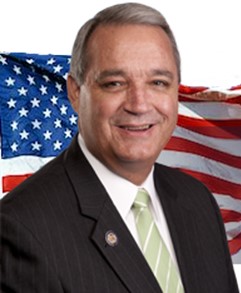 Editor’s Note:  It looks like President Obama may try to pass the Trans Pacific Partnership “free trade” agreement through the “lame duck” Congress, after November elections.

District 1 U.S. House Representative Jeff Miller is leaving his longtime seat at the end of this year.  Miller has been a staunch supporter of so-called “free trade” agreements, including the proposed Trans-Pacific Partnership (TPP).

Panhandle Politico is betting he’ll stay in Washington, DC in a hefty-salaried government sinecure.  We will apologize to Mr. Miller if he comes back to Chumuckla permanently after he leaves Congress.  But we doubt we’ll have to. 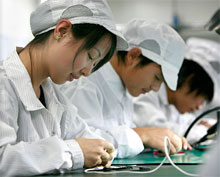 Tech Sweatshop of the sort that would be sanctioned under TPP

“Fast Track,” which passed in June 2015, allows the President to write trade legislation and present it to Congress for a yes or no vote, with no Senate filibuster, time-limited debate, and no Congressional amendments.  In effect, through “fast track,” Congress relinquished their Constitutional authority to write and pass trade legislation and added it to the President’s Constitutional authority to negotiate treaties.

America’s trade deficit with South Korea more than doubled as of June 2015, to $14 billion, since the Korea pact was signed, according to U.S. Census figures released May 5, 2015, as reported by Public Citizen. Exports to Korea decreased 6 percent ($2.7 billion) while imports increased 19 percent ($11.3 billion) in three years.

“The trade deficit increase equates to the loss of more than 93,000 American jobs in the first three years of the Korea FTA, counting both exports and imports, according to the trade-jobs ratio that the Obama administration used to project gains from the deal,” per Public Citizen.

“Although it is called a “free trade” agreement, the TPP is not mainly about trade. Of TPP’s 29 draft chapters, only five deal with traditional trade issues,” Public Citizen said. The group has challenged secretive trade processes and “free trade” provisions in NAFTA, CAFTA and other agreements they contend harm America’s economy.

Called “NAFTA on Steroids,” TPP negotiations were closed to the public, including Congress and the press for much of the proceedings. The secret talks included Obama administration trade envoys, representatives from foreign governments participating in the pact, and over 500 banks and corporations.  Congressional members eventually gained limited access to view the agreement’s text in a sealed room, but were not allowed bring other people or take notes or photos.

Disappointingly, the White House has taken yet another step toward a congressional vote on the Trans-Pacific Partnership (TPP). The administration has given notice to Congress — submitting the paperwork required to potentially hold a lame-duck TPP vote. Email your member of Congress to help prevent a lame-duck TPP vote. Even though opposition to the TPP increasingly is recognized as the correct — and politically smart — position, this recent action shows that the administration really is serious about trying to force a vote during the lame-duck session of Congress. This is dangerous. The lame-duck session is the uniquely perilous moment after the election when representatives who have retired or been voted out of office can still vote even though political accountability to constituents is at its absolute lowest. But TPP backers will call for a vote only IF they think they have the “yes” votes to pass it. Tell your representative to be a loud, proud “No!” on the TPP. The administration does not have enough votes — for now. That’s why Cabinet members are scheduled to attend dozens of high-profile events across the country over the next few weeks to try to strong-arm members of Congress to support the TPP. Your representative likely is hearing pro-TPP arguments from corporate lobbyists and administration officials every day. Make sure that’s not the only side your representative hears!