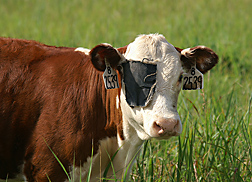 In a decision that illustrates the power international trade agreements wield over local lawmaking, labels that tell Americans where their meat came from may be a thing of the past in a few days.

Canada, Mexico and the U.S. are NAFTA signatories.

U.S. meat began carrying country-of-origin labels (COOL) in the early 2000s, in response to fears of “mad cow” disease from British beef.  Congress made it law in 2002, but it wasn’t implemented until 2008.

Canada and Mexico objected, and in 2008 filed suit in the WTO’s international tribunal.

In June, the U.S. House voted to repeal labeling requirements for beef, pork and chicken.

The American meat industry had urged Congress to get rid of labeling, which also disallows “comingled” American and imported meat from being labeled as domestic.

“So maybe the powerful special interests behind this repeal are really using this WTO ruling as an excuse to roll back basic right-to-know for American consumers. I don’t think we should let them get away with it,” Congresswomen Chellie Pingree (D-Maine) remarked during May hearings.

“I doubt there is a single consumer in America who says, “I want to know less about the food I am eating.” In fact, the opposite is true.  Now more than ever, Americans want to know where their food comes from, and they want to buy local food when they can. Buying local has created huge new markets for American farmers, great economic growth in States like mine, like Maine.

“If this bill passes, it will be harder to know if the pork chop or hamburger you are buying came from around the corner or around the world.”

There is no House record of Mr. Miller speaking on the subject.

A related Senate bill, S 1844, is currently in the Senate Committee on Agriculture, Nutrition, and Forestry; but some have called on Congress to sneak the measure into the blanket spending bill currently under negotiation. That bill is expected to pass next week.

In related news, it appears Congress will delay deciding on the “Obamatrade” Transpacific Partnership “free trade” agreement until after elections.

Mr. Miller voted YES on CAFTA and subsequent “free trade” deals, including the  one that doubled America’s trade deficit with Korea; but has consistently refused to comment on whether he’ll support TPP.

Miller released this on November 8:

The Trans-Pacific Partnership (TPP), whose text was released to the public last week, is a proposed free trade agreement between the United States and 11 other countries that would encompass many different sectors of our economy and includes countries responsible for more than one third of the world’s GDP. Since free trade agreements have an impact on the daily lives of virtually every American citizen, the American people should be able to read and review free trade deals well in advance of Congressional consideration. With a commitment to improving transparency, I supported legislation passed by Congress earlier this year to require that free trade agreements receive mandatory public review periods, and as a result, this legislation made it possible for the full text of the Trans-Pacific Partnership (TPP) to be released to the public to afford the American people the opportunity to now weigh in on it before it comes to Congress for approval or disapproval.

As a free market conservative, I support free trade agreements that open other markets to American companies and help support job creation and economic growth here at home; however, free trade agreements must not infringe on American sovereignty or cede any of the rights of the American people to international bodies. Therefore, I will closely scrutinize this agreement ahead of any Congressional vote to decide whether or not I believe it is in the best interests of the people of Northwest Florida and our Nation. A minimum of 60 days of public review must now pass before the President can sign the deal, but the deal would still need to go through Congress before it has any force of law. With several other timeframe requirements put in place to ensure adequate scrutiny, legislation to implement the agreement cannot be introduced for several months at the earliest. I look forward to reviewing and discussing TPP with constituents in Northwest Florida and my colleagues over this time period. To view the full text of the TPP click here.

On November 5, Public Citizen, a watchdog group that has opposed “free trade” agreements, arguing that they harm U.S. sovereignty and consumers, released the following:

The November 5 release of the text of the Trans-Pacific Partnership (TPP) reveals that the pact replicates many of the most controversial terms of past pacts that promote job offshoring and push down U.S wages while further expanding the scope of the controversial investor-state system and rolling back improvements on access to affordable medicines and environmental standards that congressional Democrats forced on the George W. Bush administration in 2007.

“Apparently, the TPP’s proponents resorted to such extreme secrecy during negotiations because the text shows that the TPP would offshore more American jobs, lower our wages, flood us with unsafe imported food and expose our laws to attack in foreign tribunals,” said Lori Wallach, director of Public Citizen’s Global Trade Watch.

“When the administration says it used the TPP to renegotiate NAFTA, few expected that meant doubling down on the worst job-killing, wage-suppressing NAFTA terms, expanding limits on food safety and rolling back past reforms on environmental standards and access to affordable drugs.”

“Many in Congress said they would support the TPP only if, at a minimum, it included past reforms made to trade pact intellectual property rules affecting access to affordable medicines. But the TPP rolls back that past progress by requiring new marketing exclusivities and patent term extensions, and provides pharmaceutical firms with new monopoly rights for biotech drugs, including many new and forthcoming cancer treatments,” said Peter Maybarduk, director of Public Citizen’s Access to Medicines program. “The terms in this final TPP text will contribute to preventable suffering and death abroad, and may constrain the reforms that Congress can consider to reduce Americans’ medicine prices at home.”

The text also confirms that demands made by Congress and key constituencies were not fulfilled.

“From leaks, we knew quite a bit about the agreement, but in chapter after chapter, the final text is worse than we expected with the demands of the 500 official U.S. trade advisers representing corporate interests satisfied to the detriment of the public interest,” said Wallach.

Today’s text release confirms concerns about the TPP that were based on earlier leaks and reveals ways in which the TPP rolls back past public interest reforms to the U.S. trade model and expands anti-public interest provisions demanded by the hundreds of official U.S. corporate trade advisers:
Worse anti-public-interest provisions relative to past U.S. trade pacts 

The TPP Intellectual Property Chapter would roll back the “May 2007” reforms for access to medicines. 

The TPP Environment Chapter would roll back the “May 2007” reforms by eliminating most of the seven Multilateral Environmental Agreements that past pacts have enforced. 

The TPP Investment Chapter would expand the scope of policies that can be challenged and the basis for such challenges, including for the first time ever allowing investor-state dispute settlement (ISDS) enforcement of World Trade Organization intellectual property terms and new challenges to financial regulations. 

With Japanese, Australian and other firms newly empowered to launch ISDS attacks against the United States, the TPP would double U.S. ISDS exposure with more than 9,200 additional subsidiaries operating here of corporations from TPP nations newly empowered to launch ISDS cases against the U.S. government. (About 9,500 U.S. subsidiaries have ISDS rights under ALL existing U.S. investor-state-enforced pacts.) 

The TPP E-Commerce Chapter would undermine consumer privacy protections for sensitive personal health, financial and other data when it crosses borders by exposing such policies to challenge as a violation of the TPP limits on regulation of data flows. 

TPP “Sanitary and Phytosanitary” chapter terms would impose new limits on imported food safety relative to past pacts. This includes new challenges to U.S. border inspection systems that can be launched based on extremely subjective requirements that inspections must “limited to what is reasonable and necessary” as determine by a TPP tribunal. New language that replicates the industry demand for a so-called Rapid Response Mechanism that requires border inspectors to notify exporters for every food safety check that finds a problem and give the exporter the right to bring a challenge to that port inspection determinations – meaning new rights to bring a trade challenge to individual border inspection decisions (including, potentially, laboratory or other testing) that second-guesses U.S. inspectors and creates a chilling effect that would deter rigorous oversight of imported foods.
Anti-public interest provisions that are the same as past U.S. pacts 

The TPP Investment Chapter would eliminate many of the risks and costs of relocating American jobs to low-wage countries, incentivizing more American job offshoring. 

The TPP procurement chapter would offshore our tax dollars to create jobs overseas instead of at home by giving firms operating in any TPP nation equal access to many U.S. government procurement contracts, rather than us continuing to give preference to local firms to build and maintain our public libraries, parks, post offices and universities. 

Contrary to Fast Track negotiating objectives, the TPP would grant foreign firms greater rights than domestic firms enjoy under U.S. law and in U.S. courts. One class of interests – foreign firms – could privately enforce this public treaty by skirting domestic laws and courts to challenge U.S. federal, state and local decisions and policies on grounds not available in U.S. law and do so before extrajudicial ISDS tribunals authorized to order payment of unlimited sums of taxpayer dollars. 

There are no new safeguards that limit ISDS tribunals’ discretion to issue ever-expanding interpretations of governments’ obligations to investors and order compensation on that basis. The text reveals the same “safeguard” Annexes and terms that were included in U.S. pacts since the 2005 Central America Free Trade Agreement (CAFTA) that have failed to rein in ISDS tribunals. CAFTA tribunals have simply ignored the “safeguard” provisions that are replicated in the TPP, and as with past pacts, in the TPP such tribunal, conduct is not subject to appeal. 

The TPP would ban the use of capital controls and other macroprudential financial regulations used to prevent speculative bubbles and financial crises.

The TPP can take effect only if the U.S. Congress approves it, given the rules specifying the conditions that must be met for the TPP to go into effect. The TPP’s fate in Congress is uncertain at best given that since the trade authority vote, the small bloc of members of the U.S. House of Representatives who made the narrow margin of passage possible have expressed concerns that the text release shows were not addressed.

“Now that Congress and the public can scrutinize the actual text, the reality that it fails to meet Congress’ demands and its terms would be harmful to most Americans will replace the administration’s myth-based sales job for the TPP, further dimming the TPP’s prospects in Congress,” Wallach said.