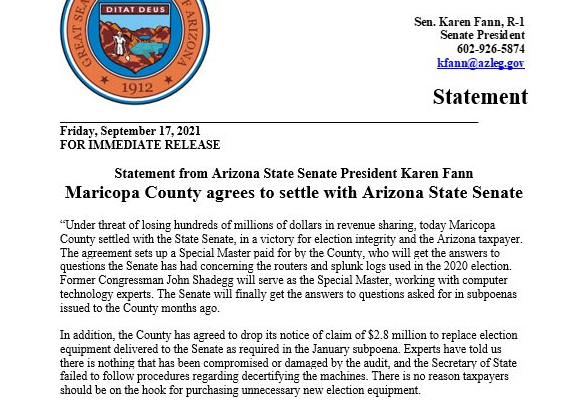 Arizona’s Senate cut a deal with Maricopa County, yesterday, that will give a designated representative, former Congressman John Shadegg, access to 2020 election routers.

“Summary: We won. They dropped their $2.8 meaningless claim for the machine replacement. We get the routers and spunk logs. Cyber Ninjas has full access. Maricopa caved.”

The audit was largely completed last month except for a forensic examination of internet routers which County Supervisors had refused to provide despite a Senate subpoena. Auditors say the routers would reveal any outside vote fraud conducted through the internet.

Arizona Attorney General Mark Brnovich, last month, notified the County that it was violating the law by ignoring the subpoena. Brnovich ordered the County to provide the equipment by September 27 or lose some $700 million in funding.

Audit results will get a public hearing Friday, Sep 24 at 1 PM MST (3 PM Central) on the Arizona Senate floor.