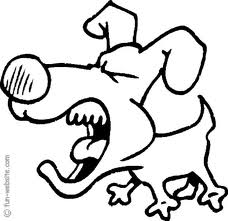 Home » Op-Ed » Your dog is annoying

Dear inconsiderate neighbor – thank you for sharing your dog’s incessant barking with everybody in a twelve-block radius. Most of us work during the day, but any sleep loss we may suffer is a small price to pay for the community-wide squirrel alert your neglected pet broadcasts 24-7-365, including Christmas Eve.

The whole neighborhood can hear his piercing shriek so I know you’re well aware of it. Unless you’re deaf to your overbred rodent’s particular acoustic range, I assume you kicked him outside so YOU don’t have to listen to him.

Here’s a complicated scientific principle some dog owners have trouble wrapping their brains around: if he’s disturbing you he’s probably disturbing other people.

Kind of like those those bratty-kid parents at the store.

The ones who never stop to consider that bag of marshmallows Precious scattered all over the floor during his adorable “dancing in the aisle with a mouthful of candy” routine might melt into a minefield of stepped-on sticky for people who Aren’t Them to be inconvenienced by later. He’s just a child! Don’t be so negative!

As for the diaper they thoughtfully left on top of the Food Court bathroom trash; how were they supposed to know it could also find a way to inconvenience people who, again, Aren’t Them but nevertheless expected to eat lunch in a toxic fume free environment? Nobody can predict the future! It was an honest mistake! They were in a hurry!

Their kid and your dog have a lot in common, neighbor. In that you are the problem.

I know, I know. All the “dog people” out there, especially the “little dog” ones are palpitating at any “heartless” suggestion their pet might not be as cute as they’d been thinking when they dressed him in that $60 “doggie couture” Santa suit for this year’s Christmas card photo.

They’re already exclaiming through outraged tears how Mr. Yappy’s “more of a person than most real people” and [snif] “a better friend than any human has ever been because he always has my back” to justify imposing their obnoxious little treasure’s disgusting personal habits on the rest of the community.

Destroy property and shred other people’s trash running loose all day? Don’t get run over! Defecate in every lawn but his own? Who’s a good boy! Attack neighborhood kids with his collarless pack buddies from equally irresponsible homes? They shouldn’t of [sic] been walking down my street!

Don’t get me wrong neighbor, we all respect your “The good of the one’s slovenly immediate gratification outweighs the good of the many trying to sleep/enjoy a dog-shit free path to the car/grow grass on the right of way without other people’s guests parking a boat and digging pickup truck ruts into it every weekend” life philosophy. Nobody’s dissing your cultural traditions.

And believe me, nobody’s more heart-warmed than I to know you love your “friend” enough to let whatever’s clinging to his paws and asshole after a long day of yard patrol smear the rugs, furniture and bedsheets I’m sure you encourage him to jump all over. Please feel free to continue letting him ass walk his itchy bottom across your dining room rug ’til it’s teeming with bacterial meningitis. Let him slobber your face and mouth with roundworm egg saturated “doggie kisses” all day long if that’s what makes you feel “appreciated by somebody who loves me for the real me and never lets me down unlike every other person in my life.”

The thing with the barking though, is that you’re involving people who haven’t signed on to your dander/feces/urine sodden lifestyle choice. People who haven’t chosen to hoard impulse purchase pets they have neither the capacity nor the intention to properly care for.

In short, people who don’t want to hear your shrill friend vent his loneliness day in and day out any more than they want to share tapeworm hugs with him.

FYI, there’s a brilliant invention available for dog owners in your situation. It’s a shock collar triggered by yapping sounds. Or you could let him in the house, like he really wants.

You see neighbor, unlike the ill-behaved kids you get to dump on schoolteachers all day, your vicious Pomeranian/scrunge-mouth Westie/bug-eyed circus freak chihuahua/thuggish flea-bitten pit-bull/whatever “statement” dog with trailer park “papers” you bought off Craigslist, tired of & ignored to roam the neighborhood/bark all day/reproduce more unwanted strays is not somebody else’s part-time responsibility.

So by all means, compensate for any lack of validation in your life with an animal bred to focus its one firing brain cell on the human who feeds it most. Just please be neighborly and shut him the fuck up so I can get some sleep.