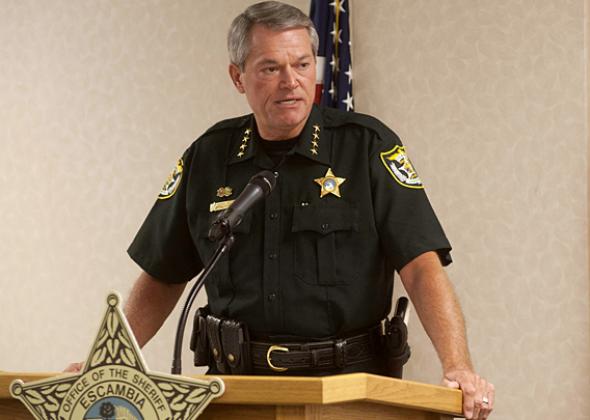 Do you notice anything wrong about this paid political advertisement?
This appeared in the Future Farmers of America catalogue for the Northview High School’s Blue Jacket Jamboree in April 2016. 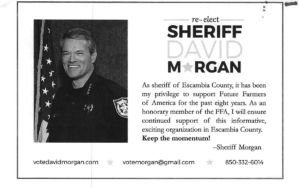 As you can see … THERE IS NO LEGALLY REQUIRED ‘DISCLAIMER’ IN THIS AD.  WILL THE STATE ATTORNEY’S OFFICE PROSECUTE THE SHERIFF AND HIS CAMPAIGN ASSISTANT AND CHIEF DEPUTY, ERIC HAINES, OR WILL HE SWEEP IT ‘UNDER THE RUG’ … AS HE DID RECENTLY WHEN IT WAS PUBLICLY PROVEN THAT THE SHERIFF VIOLATED THE STATE LAW ENFORCEMENT TRUST FUND STATUTES?

“Does ANYBODY feel any urgency to remove such a violator from office, not to mention Mr. Eddins, who never investigated or charged Morgan for such a wrong-doing?   Eddins accepted the charges for prosecution against Morgan’s former candidate for Sheriff 4 years ago, Mr. John Powell.  Powell was charged with a misrepresentation of only $100 in a finance report, which was a small oversight managed by unpaid staff.  Here, Morgan’s Chief Deputy, Eric Haines, is managing Morgan’s campaign finances WHILE ON THE JOB as an Escambia County Law Enforcement Officer.    THIS IS MUCH MORE SERIOUS than Morgan trying to eliminate competition by bringing his opponent forward with feckless charges just weeks before his election against Powell, just 4 years ago!  OUR TAXES ARE PAYING FOR MORGAN’S CAMPAIGN!   COME ON!

The information below came to the Panhandle Politico from a reliable anonymous source within the Sheriff’s Office.  Since your State Attorney is not interested, we thought you should know:

There is more to it than missing a disclaimer, the manner in which the advertisement was placed was illegal as well.

(Note: due to the fact that the person Eric Haines emailed the artwork to is under the age of 18, their name will not be released in this periodical). 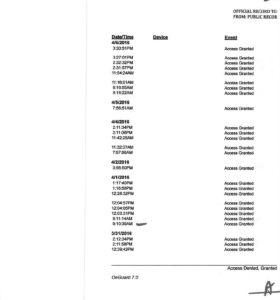 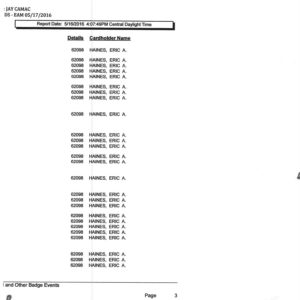 Previous: Would You Like a Little Extra Tetrachloroethylene in Your Grouper Ma’am?
Next: Pro-Life Leader calls Evers Hero, Planned Parenthood says Zero