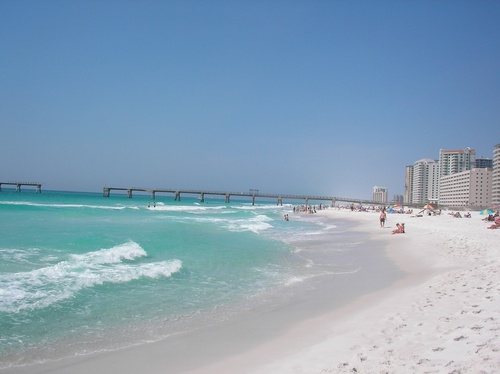 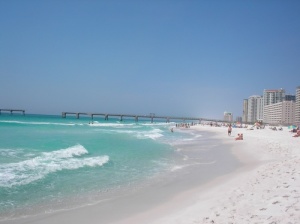 Santa Rosa’s Board of Commissioners has declined to regulate permitting and commercial use of the public beach behind Navarre condominiums.

The Board, October 20, instead recommended condominium homeowner associations ‘informally’ oversee umbrella vendors.  The vendors are some of the few concessionaires allowed to operate on the beach.

Condo HOAs have no legal authority over public beach areas, according to the County Public Information Office.

Territorial disputes between umbrella vendors and complaints about rental umbrellas monopolizing the best waterfront spots brought the issue to Board attention.

Umbrellas and chairs rent for around $25 per day, and vendors may net thousands over the Summer tourism season.

Condo HOAs controlled vendor beach access before 2005, when their leases included adjacent beach land all the way to the high tide mark.

Typically, vendors contracted with HOAs for territory behind condo buildings in exchange for a cut of revenues and, in some cases, beach trash disposal.

“The entire length of the beach and dune system along the Gulf became County property,” according to an October 15 memo from County Engineer Roger Blaylock to County Administrator Hunter Walker.

“The ECL map moved the southern property line of the commercial core leases from the mean high water line to the northern toe of the constructed dunes.”

“Prior to map adoption commercial core leaseholders (condos townhomes) contracted and regulated chair/umbrella vendors on their beaches. They selected vendor services and area[s] of beach vendors could operate. This informal practice continues today with minimal regulation by the county,” the memo notes.

“Let the HOAs handle this and basically keep government out of this portion of what goes on on our beach,” Commissioner Bob Cole remarked.

The County doesn’t require vendor permits, but a Leave no Trace Ordinance is in place.  The ordinance forbids leaving recreational items on the beach overnight, unless a permit is obtained.  The fine is between $50 and $450 for subsequent offenses.  The County occasionally removes abandoned property from the beach at night.  Blaylock says the ordinance is working well.

“It generates complaints whenever we collect [abandoned] beach chairs and personal property that’s there,” he told the Board.

Umbrella vendors typically leave wooden storage boxes on the beach through the Summer.  Beachside trash cans belong to condos, who maintain and empty them.  Condos also typically construct and maintain any protective dune ropes.  The County runs a rake machine along the beach on Summer weekends but rarely polices for trash, glass, dune dumping or pets behind condos.

Navarre Beach is currently fully public accessible and set up spots are available on a first come first served basis.  Chair vendors arrive early in the morning during Summer.  Tourists and owners who want better locations by the water must claim them by getting to the beach first.

“I just don’t see any need for [regulation],” said Navarre Towers HOA President Robert Coley.  “I think the problems can be best handled by the HOAs on Navarre Beach.”

“Taking the power away from the association would be a mistake,” Navarre Beach Regency HOA President Betty Evans said.

“Ninety percent of the people that are using those chairs are in front of those 10 condos that have the beach rentals available,” Pearl HOA President Gary Buroker remarked.

“And those condo associations can decide to do it or not do it.  And it’s worked well for a number of years and we think it should stay that way. And we don’t feel we need extra regulation and to be taking away that ability to manage that beach behind our properties.

“We treat it as our own,” Buroker added.

“The beach vendors do help keep it clean in the summertime, that’s part of their responsibility in our contract. But from November first to March first we’re making sure that we don’t have trash out there.  We pick it up, we dump it out…not only we are proud of it, but Santa Rosa County can be proud of it.  So again we don’t feel we need the additional ordinance to do what we need to do is provide beach service to our guests and owners of our beach.”

“The last we want to do is look for something to regulate,” said Commissioner Jim Melvin.  “If the HOA can fix it and take care of it, that’s fine.  I’m sure this Board would deeply appreciate it because we get enough email and there’s enough traffic a day, I guarantee you, [we] spend an hour, and hour and a half a day on the Internet just answering complaints, etcetera, etcetera.”

Those “free enterprise” sentiments don’t extend past umbrella concessions:  despite record tourism numbers, beach entrepreneurship is off limits outside of commercial lease parcels.

“Mobile concessions are not allowed on Navarre Beach,” according to the County.

If beach title ownership comes to Santa Rosa County, it’s not clear whether condos would have the option of buying areas that are currently open to the public and controlling future access.