By JIM TURNER
THE NEWS SERVICE OF FLORIDA

THE CAPITAL, TALLAHASSEE, September 26, 2014 …… The controversial and at-times muddled search for a new president of Florida State University includes an expected tab of about $160,000 for consultants.

FSU Board of Trustees Chairman Allan Bense said in an email Thursday that “it was well worth the cost.” The months-long search process resulted in influential state Sen. John Thrasher, the odds-on favorite, getting offered the job Tuesday. 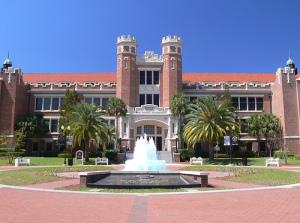 More than half the cost came after the school had a change in search consultants, which was in part a result of the process being temporarily halted in May with the intention of considering only Thrasher, a St. Augustine Republican who untilWednesday was also chairman of Gov. Rick Scott’s re-election campaign.

Jennifer Proffitt, United Faculty of Florida-Florida State University Chapter president, praised the work of consultant Alberto Pimentel and his firm Storbeck/Pimentel & Associates, which was brought in to restart the search after the initial consultant resigned.

However, Proffitt called the overall spending a “waste,” as the seven-month search ended with Thrasher, as many expected, getting the job.

“While I think Pimentel earned his money as he did recruit stellar, distinguished, and experienced academic leaders, in total it appears that it was a waste of taxpayer money as the decision was made long before the search process began,” Proffitt said in an email.

Out of 39 applications for the FSU president’s position, including Thrasher, a search committee brought in 11 candidates to interview. Out of that list, four finalists were recommended to the Board of Trustees: Thrasher; Michele G. Wheatly, who until June had been provost at West Virginia University; Colorado State University System Chancellor Michael V. Martin; and Richard B. Marchase, University of Alabama at Birmingham vice president for research and economic development.

Wheatly, Martin and Marchase were among those recruited by Pimentel.

Bense, who was described Wednesday by Thrasher as “a good friend,” also defended the work of Pimentel and the cost of the search.

“Given the quality of candidates presented by Storbeck/Pimentel & Associates, it was well worth the cost,” Bense, a former state House speaker, said in the email.

In May, Funk recommended the search be paused so the committee could interview just Thrasher, noting that Thrasher’s desire for the job and the state’s Sunshine Law were keeping other potential applicants from putting their names forward for the position.

Funk’s decision to resign also came after his proposal drew a unique vote of no-confidence from the Faculty Senate.

Shortly after Funk’s resignation, the school signed a contract worth $98,000, plus expenses, with Pimentel’s firm.

Two-thirds of that money was to be paid within two months of the contract being approved June 12. The final third is being held until at least 30 days after a president is successfully hired.

The offer to Thrasher by the school’s Board of Trustees still requires a contract to be signed and approval, anticipated in November, from the state university system’s Board of Governors.

The 17-member statewide board is comprised of 14 gubernatorial appointments, of which Scott has named 11.

The search financial totals do not include costs incurred by the school for bringing in candidates to interview or to hold meetings and forums with the search committee, staff, faculty and students.