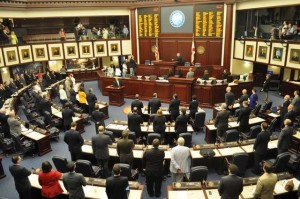 HOUSE PITCHES $76.2B BUDGET PLAN
The Florida House on Friday released an initial $76.2 billion budget proposal for the fiscal year starting July 1 — a proposal that is about $800 million smaller than a spending plan released in January by Gov. Rick Scott. While the House and Scott differ on varying elements of the budget, a key difference is that the governor’s proposal includes money for an extension of the Low Income Pool program, which sends additional funds to hospitals and other health-care providers that serve large numbers of poor and uninsured patients. The nearly $2.2 billion program is scheduled to expire June 30, and state and federal officials are negotiating about whether it will continue with changes. House leaders said they would not count on the so-called LIP funding in their initial budget plan. The House also differs on the LIP issue from the Senate, which is expected to release its initial budget plan Friday. The House and Senate each will pass budget proposals before holding formal talks next month on a final spending plan.

SENATE PANEL TO STUDY TEXTBOOK TAX BREAKS
A Senate committee Monday will take up a proposal by Gov. Rick Scott to provide a sales-tax exemption for college textbooks. The bill (SB 938), filed by Sen. Anitere Flores, R-Miami, is scheduled to be heard by the Senate Higher Education Committee. Scott has made a major priority of the tax exemption, arguing it would help hold down college costs for students and families. He appeared during a news conference this week with student leaders from across the state and touted the tax break, along with preventing tuition increases. He said the textbook exemption would save about $41 million for students and their families. “A great education you can’t afford is no help to our students,” Scott said.

JUDGE SETS HEARING IN MEDICAL MARIJUANA DISPUTE
Administrative Law Judge Elizabeth McArthur has scheduled an April 14 hearing in a legal challenge to a proposed regulatory framework for Florida’s new medical-marijuana industry, according to a document posted on the state Division of Administrative Hearings website. The case challenges a proposed Department of Health rule for carrying out a 2014 law that would make available a limited type of medical marijuana. A Jacksonville attorney filed the challenge on behalf of 4-year-old Dahlia Barnhart, who has an inoperable brain tumor. The challenge alleges that the department did not follow the law in drawing up the rule. In part, it takes issue with the way the department proposes selecting five “dispensing organizations,” which would grow, process and dispense the cannabis. In November, another administrative law judge rejected the department’s first attempt at a rule to carry out the law, which allows a type of marijuana that is low in euphoria-inducing tetrahydrocannabinol, or THC, and high in cannabadiol, or CBD.