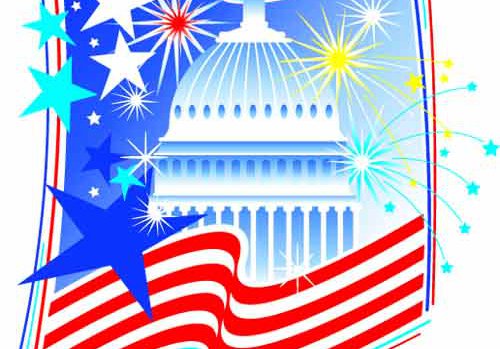 Cue America’s far-right “Patriotic-er than Thou” crowd to paroxysms of orgasmic outrage.  The screamyface “Town Hall” anger!  The righteous waving of the flag!  Don’t Tread on Me!

Jackbooted Feds are after our gold and our bugout packs!   Time to toss some tea into the harbor!

In the wake of recent police shootings of unarmed and often un-resisting American citizens, self-certified (home school PhD!) conservative Constitutional street professors, who can cite chapter and verse on Ruby Ridge, Waco and Cliven Bundy, have been mysteriously silent on their favorite topic of government persecution.

Maybe they grabbed those bugout packs and escaped down a bunker with a lifetime supply of canned beans.  Holed up safe and sound for the next few years poring over random, out-of-context Federalist Paper “facts” like a chimpanzee trying to figure out what a shoe is for.

Or maybe it turns out “Liberty” is a relative term inside the tiny tribal bubble America’s “Take our Country Back” people spend their free time polishing flag pins and waiting to be aggrieved in.

In fact, three recent cop killings that captured national attention have been followed by a seemingly out-of-character conservative frenzy to defend government-sponsored homicide.  These are people who’ve historically devoted endless time and energy pontificating about coming tyranny and the dire need to drown government in the bathtub.

*John Crawford, 22, was talking on a cell phone in an Ohio Wal-Mart and holding an unloaded BB gun he picked up off the store shelf and had pointed at the floor, when Ohio police shot him in the back and killed him.  p.s., Ohio is an open carry state.  No nationwide Tea Party foaming at the mouth.  No grandiose plans to march on Washington.  No screamy-face letters to the editor about the coming FEMA Death Camp Apocalypse.  Lots of newspaper article comments about “waving a gun around in a store” by people who weren’t there, though.

*Eric Garner, 43, died July 17 after Staten Island police literally trod upon him then choked him on the ground as he told them “I can’t breathe.”  Our far-right Freedom experts immediately pronounced the homicide justified, despite videotape evidence to the contrary.  Free market expert and right wing hero Rand Paul went one step further; crawling out from under a rock just long enough to use the tragedy to complain about government cigarette taxes (Garner was selling “loosie” black market cigarettes when police killed him).  America’s conservative Constitutional “originalist” guardians get bonus points on this one for their noisily offended outrage at peaceful protesters exercising their 1st Amendment Freedom of Assembly rights by objecting to the police killing unarmed citizens.

*Tamir Rice, who was TWELVE, was shot by police November 22, as he sat on a Cleveland Recreation Center park bench with a toy gun.   The officer who killed him “one and a half to 2 seconds after arriving at the scene” had been dismissed from a previous police job for performance problems, including being “distracted and weepy” during weapons qualification.  Where are our fine, upstanding Tea Party types and Freedom-shouters on this one?  Where’s the flag waving?  Where are the misspelled-sign intensive local protests?  What about the Constitution?

Compare those three homicides with the three notorious incidents, which ALL involve resisting arrest, mentioned earlier.  Those cases, our Patriotic-er than Thou conservative neighbors will be quick to pontificate, represent government overreach at its worst.

In the 1992 Ruby Ridge incident, government FBI and ATF agents fabricated evidence against Randy Weaver, then stormed his property and killed his 14 year old son and wife.  It was a major impetus for the rise of right wing anti-government movements nationwide.  In this case, the far-right appears to have no trouble understanding it doesn’t bode well for “Freedom” when government forces attack you on the flimsy basis you have lawful firearms in your possession.

Something America’s conservative Patriot crowd evidently isn’t losing sleep over in John Crawford’s (who had no chance to resist arrest before he was gunned down) case.

In the 1993 Branch Davidian siege, FBI, ATF and Texas law enforcement agents blundered a standoff resolution and were at least partially responsible for the deaths of 76 American citizens.  It was a rallying cause for conservative anti-government activists nationwide.  David Koresh, a self-confessed pervert who admitted to molesting numerous children including a 12 year old, was holed up in a group marriage scene of the sort conservatives love to excoriate when it involves Hollywood personalities or hippies.  Koresh and his adherents were resisting arrest for 51 days, but in this case, our flag-waving Constitution PhDs had no trouble understanding that the government’s military-style assault on Koresh, his sheeple followers, and the children who had no choice in being there was not in the best interests of American liberty.

Contrast that to the Tamir Rice incident, where an unarmed child was cut down by police, again with no chance to resist arrest…without a peep from Tea Party Constitutional Rights experts.

Then there’s the Cliven Bundy case, where members of the Constitutional Screamers Club took the trouble to camp out on Mr. Bundy’s property to support his claims of government persecution.  Mr. Bundy, who was evidently stealing public grazing resources from the American people (and our flag!) got an automatic Liberty pass during his standoff…at least until he opened his mouth and vomited all sorts of social opinions the far-right would rather people not notice they may be habitually associating themselves with.  p.s. Bundy told armed supporters he didn’t recognize BLM arrest power.

Compare Patriotic-er than Thou knee jerk support for Bundy to the Eric Garner case.  Unarmed Garner verbally objected to arrest before officers tackled, jumped on, subdued and strangled him.  There was a video.  The coroner called it a homicide.  Doesn’t matter.  Our far-right Patriotism experts left red, white & blue skid marks in their haste to defend police actions.

Crazy old man stealing public resources for 20 years and denying government arrest authority:  benefit of the doubt.  American choked to death on camera for objecting to arrest for a few seconds:  screw you.

So, right-wing Guardians of Truth, Justice and the American Way, how come those hallowed Freedoms you’re so anxious to “take back” don’t apply across the board?

Surely it’s nothing personal.  The God-Given Blessings of Liberty are universal, right?   Something about equal protection?

Oh, right, our far-right Freedom screamers would like to repeal the 14th Amendment (equal protection) and the 17th Amendment (the People elect Senators…not state government).  It’s all on the Article V Convention of States articleVprojecttorestoreliberty.com website, among others.

But wouldn’t that increase tyranny?

Yes Virginia, but only for a select few.

Some people are “more equal” than others, you see, in far-right bubbleland.  Not everybody deserves “Liberty.”  After all, when everybody has it, it makes those…let’s call them “elect”…few who really appreciate it feel less special.

Tea Party philosopher-kings like to cite “evidence” when educating the rest of us on how Constitutional Freedoms work.

Looking to the evidence, it appears we can conclude far-right “Liberty” is less about absolute individual rights and more about tribal ranking systems where everybody knows their place in the authority chain.

The far right don’t fear authority…they worship it.  But only for themselves and the Big Boss liege-lords they dream of helping control everybody else’s freedom.

Just engage our chimp friend-with-the-shoe on the subject of whether America is a “Republic” or a “Democracy” for in-depth insight into the far-right notion of “Liberty.”

“America’s a Republic, not a Democracy,” Mr. Chimp will inform you.  He thus subverts any scary, uncontrollable ideas about universal rights his particular troop doesn’t feel like sharing in favor of cartel-controlled autocratic diktat.

The possibility that a “Republic” is a form of “Democracy” doesn’t occur to Mr. Chimp because that’s too complicated and confusing.  There’s not enough room in the bubble to accommodate that kind of grey area critical reflection and keep everybody’s relative tribal rank straight.

In the far-right conservative world, that part’s all black and white.