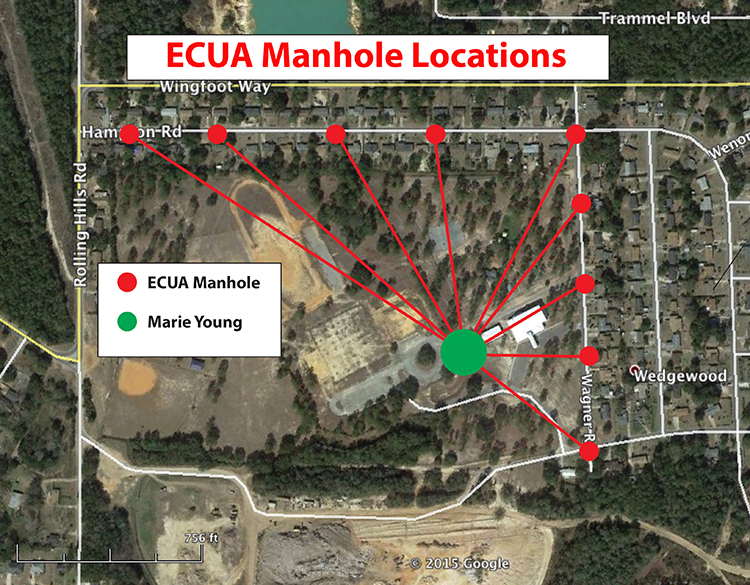 The owner of a landfill facing closure for code violations says although odors have dwindled, his facility is being targeted to reduce competition for government-sponsored recycling operations; and is not the only odor source in the area.  Local government agencies deny the allegation.

Rolling Hills landfill has been permitted to receive construction and demolition (C&D) waste since 2007.

Hydrogen sulfide’s odor detection threshold is .6 parts per billion (ppb), per a March 2015 Florida Department of Health draft report on gas testing at the landfill, provided by co-owner Scott Miller.

The health hazard threshold is 70 ppb.

“The [U. S. Department of Health and Human Services Agency for Toxic Substances and Disease Registry] ATSDR estimates that breathing 70 ppb or less of H2S between 1 and 14 days is unlikely to cause illness,” the report says.

“Landfill management practices may have increased hydrogen sulfide gas production during the spring and summer of 2014,” according to thereport.

The landfill area near the Marie Young Community Center, where odors have been of particular concern, was not covered until after a July 22FDoH-Escambia County health alert, it says; noting:  “FDOH-Escambia County lifted the alert on August 5, 2014 after hydrogen sulfide gas levels subsided.”

“Inhaling (breathing) the highest level of H2S measured near the Rolling Hills Landfill for 30 minutes between July and December 2014 could have harmed people’s health,” the report notes.  “The highest level of H2S found in the Wedgewood community (590 parts per billion or ppb) is too close to levels known to cause headaches and nose/throat irritation (2,000 ppb) to rule out these effects.”

Gas readings exceeded 70 ppb 48 times between September 4 and December 31, but “generally decreased between July and December 2014,” per the FDoH draft report.

However, a code enforcement official reported odors during an April 14, 2015 inspection, which now allows the County to begin fining Rolling Hills $200 per day.

The Health Department report assumes Rolling Hills is the source of the odors.

Landfill co-owner Scott Miller criticized the study for excluding ECUA, which has sewer infrastructure in the same area, as a possible source.

An April 22, 2015 email from the Florida Health Department, responding to Miller’s concerns, provided by Miller, reads:

Thank you for your phone call yesterday to Debby Tipton regarding the Department of Health’s draft Rolling Hills Landfill report.  We understand you are concerned the draft report assumes the Rolling Hill Landfill is the source of hydrogen sulfide at the adjacent Wedgewood community center. We also understand you are concerned the draft report does not consider other sources of hydrogen sulfide including Emerald Coast Utilities Authority sewer lines.

We will look into your concerns and modify our report as appropriate.  If you have any additional concerns or comments on our draft report, please contact me before the April 30 public comment deadline.

Miller says the storm-related operational issues were addressed, and blames continuing odors on ECUA sewer infrastructure near the facility.  A map provided by Miller details a series of ECUA manholes running north and east of the Community Center (map A). 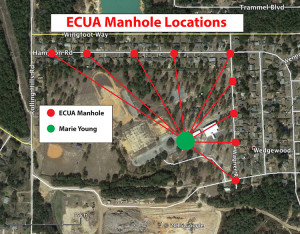 Documents provided by ECUA for January 6 show ECUA testing stations measured hydrogen sulfide odors at .002 parts per million or below that day in ECUA areas surrounding the landfill.

The ECUA test spots were located south of the Community Center, in a roughly circular zone around the landfill (map B). 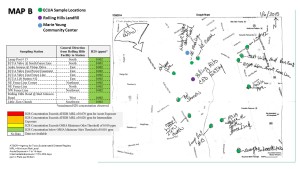 During the April 2014 storms, support under an ECUA sewer pipe that runs near the landfill was damaged.  ECUA’s June 2014 “Customer Pipeline” newsletter discusses the damage:

On May 8, ECUA discovered three areas near the Rolling Hills Landfill where a major washout had occurred, uncovering and eliminating the ground support for our 42-inch sewer transmission main to the Central Water Reclamation Facility (CWRF). These areas had been inaccessible until this time because of the recent storm damage and flooding.

Of particular concern to us was a 30-foot long section where our sewer main was suspended in the air with the pipe bedding washed out beneath it. This main flows millions of gallons of raw sewage the the CWRF on a daily basis and a break in the line would be disastrous. We immediately mobilized our forces and several contractors on an emergency basis to build a supporting structure for the pipe. A temporary access road had to be built before we could install 35-foot sections of steel piling and weld cross-section support members. This work was critical and had to be done quickly, in advance of the heavy rains forecasted for May 9 and 10. The work was completed late Friday, May 9. Great job to our staff and contractors!”

In addition to overlooking ECUA odors; and despite receding odors in general, Miller says; government continues to aggressively pursue code violations to close him down permanently.

He contends it’s to divert C&D customers to a recycling business from which Escambia County and Emerald Coast Utilities Authority will get a cut of profits.

Escambia and ECUA are jointly sponsoring the recycling center, planned to be up and running 24 months after a contractor is selected.  Bidding for the project opened November 18, 2014 via an ECUA Request for Qualifications (RFQ).  It closed December 18, 2014.

“I thought the timing was suspicious,” Miller said.  “Barely six months [after storms] when you talk about things that move at the speed of government; and you’re talking about two completely separate government entities.”

The new recycling facility will be built and operated by a private contractor, and Escambia County and ECUA will receive a portion of the revenues from marketing recyclable waste.

The County and ECUA must each guarantee 100,000 tons per year of waste to the facility.

According to the RFQ, “acceptable waste” includes C&D trash of the type Rolling Hills is permitted to receive.

The facility will also be able to process out-of-County trash, from which Escambia and ECUA would collect “host fees.”

“Every bit helps, as far as tonnage,” he noted.  “In my case we’re not talking about a little bit.  I’m a significant player in the industry, the only competition I have is the County.”

Rolling Hills generates $2.5 million in revenue a year, according to Miller.

“When you translate that into the $48/ton the County charges – and they’re going to $60/ton – you’re really probably starting to talk about anywhere from $10 to $15 million dollars a year,” he predicts.

“When you start getting into the $15 million dollar range you’re starting to significantly impact peoples’ budgets, and that that’s an attractive plum for any government.”

But despite the inclusion of C&D waste in the RFQ, ECUA says the new recycling facility won’t process it.

“The RFQ was written to be broad enough to be inclusive, rather than exclusive, with regard to potential bidders.   However, there are no plans to include C&D material at this facility and neither of the top two firms currently in negotiation is interested in processing C&D material,” ECUA spokesperson Nathalie Bowers said in an email.

In Attachment A, titled “Definitions,” the RFQ states:

“At a time when it’s extremely controversial, of course they’re going to say they don’t want it,” he remarked.  “Once there’s no place else to take it, that’s where it’s going to go.  What I would say is their words and their music don’t go together.”

Miller also says an August 21, 2014 County land clearing debris moratorium resulted in $40,000 a month worth of business being diverted to a compost processing site ECUA is building independently of the recycling center.

According to an August 18, 2014 email from the County, provided by Miller, Rolling Hills was in the process of applying for an LCD permit, but was not expected complete it by the time the moratorium was expected to take effect.

“At the time of the June 17, 2014, Notice of Violation, [Rolling Hills] was accepting land clearing debris (LCD) onto a portion of its property that was not permitted to accept either C&DD or LCD.  On August 21, 2014, the Escambia County Board of County Commissioners passed Ordinance Number 2014-31 creating Chapter 82-229 of the Escambia County Code of ordinances which placed a moratorium on permitting or re-permitting C&DD and LCD facilities.

If Escambia County receives a completed permit application and the necessary permit application fee for a CDD or LCD facility prior to the commencement of the moratorium, that CDD or LCD facility may operate during the moratorium, provided that all activities comply with applicable Escambia County codes, ordinances, and regulations.”

Land Clearing materials that used to go to Rolling Hills are now being received at ECUA’s Central Reclamation Facility, where they will be composted in a biosolids composting facility, agency spokesperson Nathalie Bowers affirmed.  That facility is currently being constructed at the CWRF site, Bowers said.

“Literally at every turn, the County has been talking about we don’t want this debris, but everything that they do ensures that they will get it,” Miller remarked.

On April 14, 2015, Escambia’s Division of Code Enforcement cited Rolling Hills for failing to comply with the Special Magistrate’s ruling.

According to a County press release, during an April 14 inspection of the area surrounding Rolling Hills, Escambia County Code Enforcement found the landfill was in violation in two areas:

Per the Magistrate’s order, the management of the Rolling Hills Construction and Demolition Debris Landfill will be fined $200 per violation, per day until the violations are abated, the release says.

“The County’s effort when it comes to issues surrounding landfills and barrow pits is to facilitate compliance by the operators of the facilities. County staff, Commissioners and Administration have not targeted any specific business. The County/ECUA recycling project is a standalone project. It has nothing to do with code enforcement, public health and environmental concerns raised by area landfill operators that have been documented, on several occasions, violating law.

Whatever revenue is generated by recycling, will need to be used to offset the cost of recycling. The effort between the County and ECUA does not include any kind of Construction, Demolition Debris processing, meaning there will still need for local providers.”

Regarding the land clearing debris moratorium, Pearson said in an email that “the action being taken was not targeted at any one specific site,” and noted moratorium ordinance verbiage that reads:  “…the Escambia County Board of County Commissioners believes that some permitted operations are not complying with County codes and regulations…”

A selection committee has narrowed the recycling center contractor field to 4 firms and is currently in negotiations with the top two candidate firms, according to Bowers.

RFQ for Facility is located at the following link: