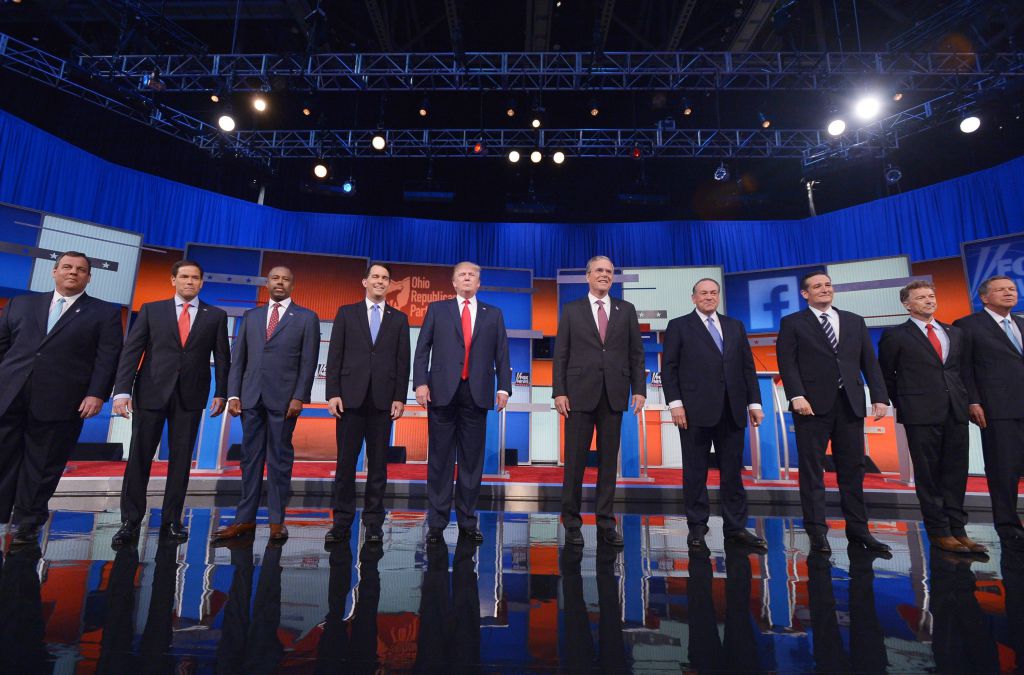 Donald Trump made a particularly astute observation at last night’s Republican Presidential debate: if he hadn’t jumped into the race, nobody would be talking about immigration.

Needless to say, breathless morning-after media recaps are ignoring the comment. They’d rather not discuss the certain lack of substance last night’s questions, like election coverage in general, displayed.

That’s because what they really want is for Trump to just go away.  So they’re helping the process along with strategic question choices. Most of which have nothing to do with concerns the majority of Americans, teetering on the edge of a sinking economy, share. An economy illegal immigration worsens every month.

It was clear CNN’s main goal last night was a fight. The presence of Carly Fiorina, whose poll numbers in no way merited her inclusion in the oddly eleven-numbered field, but who was recently insulted by Trump, made that pretty obvious.

From the direction of questions, it looks like CNN experts were hoping longshot candidates would pile on Trump. Maybe leaving an opening for someone else…a Third Place candidate conveniently sited next to frontrunner Trump perhaps…to stand out as the wise and experienced choice.

Not to mention the most electable establishment choice if Hillary Clinton somehow doesn’t make the ballot.

Could CNN’s pointed attempts to provoke Fiorina have been any more obvious? Did they add anything to the public’s understanding of the issues facing this country?

Of course, CNN will say their goal was to flesh out “character.” Apparently to the exclusion of topics that will impact Americans’ daily lives far more than Fiorina’s face in the next four years.

The media can drone on about the “importance of character” in elected officials all day long. The fact of the matter is that character and elected job performance often don’t go hand in hand. We all know Jimmy Carter is a great guy. That didn’t prevent some major problems with his Presidency.

More to the point, the media is a prime manipulator of public image to begin with. And they obviously couldn’t care less about real issues of “character” – or we’d see a lot more stories on crony capitalist stealing and government corruption.

That’s why nobody challenged Dr. Ben Carson’s outlandish suggestion American tax law be based on the Bible. It wasn’t controversial enough in that group to spark a fight. Who cares if it’s a gross violation of basic American church-state separation principles? It’s boring TV! And more to the point – it doesn’t hurt Trump.

Nor did they pursue the topic of bailouts that was raised during the earlier 4-candidate debate. Should Americans be worried about another “too big to fail,” economy-killing wealth transfer to Wall St.? Who cares!

Instead, CNN chewed up scarce debate time on the perennial, pointless wedge issues of abortion and vaccines and climate change; along with mind-numbingly stupid time wasters about which woman’s face should go on money, what candidates’ Secret Service codename might be, and the greatness of Ronald Reagan.

CNN touched on the tax code to allow candidates to polish up their Fair Tax and Flat Tax credentials. Those programs, of course, have no chance whatsoever of being implemented in any way, shape or form, ever. But they divert attention from actual problems with the tax code. Like the ones that privilege megacorporations and the banking industry over small business owners and people who work for a living. Moderators did ask about hedge fund manager tax welfare, but they couched it in terms that alluded to Trump’s comparatively progressive positions, in what was surely another attempt to provoke attacks on his conservative credentials.

And of course, we heard a long segment on foreign policy. It’s the ideal arena to trip-up non-career government candidates on factual minutiae, plus it provides a bottomless venue for speculation about issues that don’t embarrass media advertisers and Wall St. puppetmasters. By the time the winning candidate ascends to office, the ever-shifting foreign policy sands will have changed again, and any debate answers will be old news.

* The dwindling middle class and the rise of working poor who can’t live on 3 crappy part time jobs, let alone one. Governor Scott Walker was shut down shortly after he mentioned the word manufacturing last night. Interviewers preferred to use valuable time on a vague climate change discussion; which allowed Wall St.’s latest bubble scam, cap and trade, to come up.

* Congressional looting of Social Security and ways to strengthen it. Moderators shut the subject down when Governor Chris Christie started to bring up detailed solutions.

* The skyrocketing cost of health care and the insurance industry’s part in it; including the billions added onto American middle-class shoulders by Obamacare. Governor Mike Huckabee was immediately shut down when he touched on this topic last night.

* The damage personal debt does to working Americans and the larger economy. Banks get an almost zero percent interest rate from the government. Why are financial institutions charging 21 percent on credit cards? And returning less than 2 percent on savings accounts?

*The rise of incarceration as big business, and judicial & police state complicity therein. In fact, police state and NSA spying in general.

*Roads and bridges that crumble while replacement money is shunted to defense contractors and other unproductive bottomless pits.

* The gross waste of money, police state growth, and harm to civil liberties the so-called drug war has imposed on American citizens. CNN raised the diversionary topic of medical marijuana, then allowed “libertarian” Rand Paul to equivocate on the 10th amendment to weasel out of addressing it as a personal freedom issue.

Lest Republicans think they’re the only targets: on the Democrat side of the race, the media are very busy pretending Bernie Sanders isn’t drawing crowds and pulling millions in small donations to his campaign.

Like Trump, Sanders is also forcing discussion of things the media would rather ignore. He’s not as apt to personally embarrass reporters with Trump style insults, so they’re happy to sneer at his wrinkled shirt and endlessly remind everybody about his “socialist” leanings.

TV news outlets have always been criticized for focusing more on the horse race element of elections than substantive issues. It makes for better television to goad a fight than to drone on about tax code.

But at the end of the night, CNN’s performance was about more than pushing entertainment over information.

It was about sowing discontent as an end in itself. Because that’s a wonderful way to divert attention from complicated subjects media bosses and big advertisers would rather voters not concern themselves with.

The most important question that wasn’t asked last night is: who’s pulling mass media strings, and why don’t they want voters to hear about government corruption, wealth inequality, sinking wages, and personal debt?

Maybe Trump or Sanders will answer in the next debate.

Previous: Mobile Airbus facility up and running
Next: Pope blames global problems on everything but the obvious