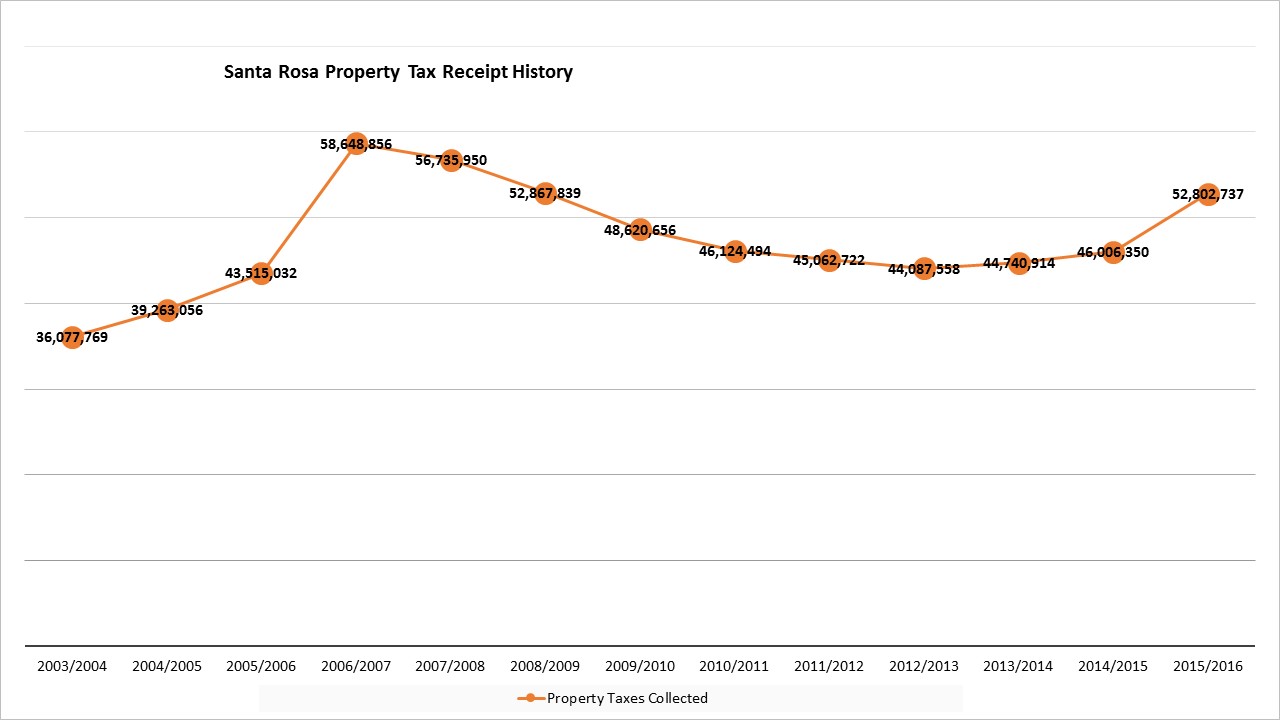 Now our reassuringly traditional selection is openly calling for a tax hike. With no discussion of maybe cutting some overblown public salaries…or selling unneeded land like the overpriced, $3.2 million Pullum property. Or cutting the Sheriff’s ever-expanding budget.

Oops. Guess people should have paid more attention to candidates’ messages than to fancy suits and syrupy rhetoric about God and family.

Sorry Santa Rosa voters, you have nobody to blame but yourselves. You elected a slate of ass kissing water carriers…and it’s YOUR door they’ll be knocking on to fill the pail.

Thanks for dragging the rest of us down with you, “traditional conservatives.”

Meanwhile, the Pensacola News Journal has their lips so firmly planted on our County Commission’s supposedly broke posterior there’s apparently no room for spurious activities like asking questions.

Here are a few items PNJ seems to have overlooked in their breathless rush to affirm SRC Commission’s insistence a tax hike is “necessary:”

–Where is the rollback rate in all this? That’s the amount the millage rate would have to be reduced in order for the County to collect the same amount of property taxes as last year.  It’s not in budget documents released on the website.  Why not?

–PNJ stenographers have dutifully copied and pasted County predictions of a “$3 million budget shortage” without question. Did PNJ scrutinize the budget to make sure that number hasn’t been padded along the way?

–PNJ consistently fails to mention last year’s 3% employee raises. Unfunded County employee raises added $1.3 million per year in a Depression that has private sector employees losing hours and getting laid off. The raise was not balanced into the budget, so officials dipped into reserves and other non-recurring sources to pay for it. Even the budget documents note this.

–PNJ parrots Commission concerns about a $943K shared Medicaid cost increase while failing to mention that cost is expected to fall by 15% over the next three years, to $1.8 million, according to the Florida Association of Counties. It’s currently at $1,238,960.

–Electricity franchise fees are on the rise because PNJ’s good friends and big-dollar advertisers at the electricity monopoly continue to raise rates. That’s the extra 5% tacked onto electricity bills that goes to County coffers. The monopoly’s own SEC filings say rate increases have improved profits. Has PNJ considered that those rate hikes are another hidden tax? The County can spend franchise fees as they like. Historically, part has been allocated to roads, part divided 5 ways between commissioners for recreation spending; and part allocated to “economic development.” Millions have been flushed down the “economic development” toilet in recent years – has PNJ bothered to research where all the predicted “good paying jobs” that were supposed to materialize from those wasted funds are?

–What about impact fees? PNJ lumps them in with gas taxes and states “county officials pointed out that some of those funds are more restricted than property taxes,” without specifying that it’s GAS TAXES that are restricted, not impact fees. The fees, levied against new construction, are designed to recapture some of the public infrastructure costs associated with new development. The county established them in 2005 and raised $9.48 million between 2006 and 2008, before suspending their collection. Impact fees have been opposed by local developers – is that why PNJ is avoiding addressing them?

–PNJ appears to have omitted the fact that budget documents also advocate a $9 per parcel tax for police communications equipment be established in 2017. This year, the Sheriff’s budget increases by $4.1 million, despite an expected $2.67 million in revenues for housing prisoners. Did PNJ scrutinize the Sheriff’s budget before making blanket statements about the need to increase it?

–PNJ says “County Administrator Hunter Walker proposed the approximately 6.4 percent property tax increase Tuesday — the first time he has done so in his 20 years with the county,” which appears to insinuate the County has never raised taxes before. In fact, Santa Rosa has raised property taxes numerous times since 2004.  Officials are shopping around a graph that suggests tax revenues have decreased since 2007 to push their case. 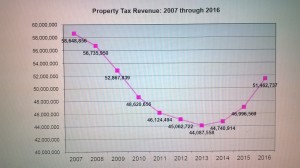 But “revenue decrease” is a relative term to begin with – considering the 34.7% “windfall” increase sparked by Hurricane Ivan recovery and rebuilding. Ivan hit in September of 2004.

The county lowered the millage rate in 07/08 after a new state law capped revenue hikes, but still collected $56.7 million in property taxes.

Sure would be nice to see so-called “conservatives” practice what they preach once in a while.

*Numbers have changed from our previous report because expected revenues and County historical tax numbers as published on the Budget webpage http://www.santarosa.fl.gov/budget/documents/2016%20Tentative%20Budget.pdf have changed since then. They previously reflected a 9.5 percent proposed hike.